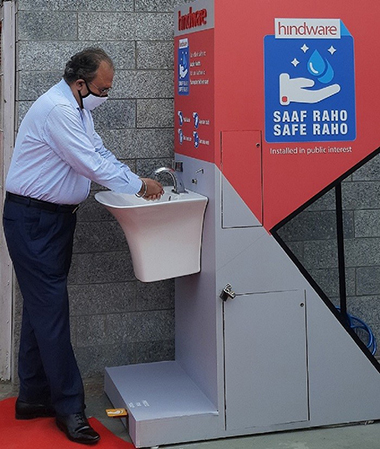 With an aim to promote good health and hygiene in the society, Brilloca, makers of bath ware solutions brand, Hindware, has introduced the first-of-its-kind ‘Contactless Handwashing System’.

The sensor-based handwashing system aims at creating awareness and building access to safe and hygienic handwashing facilities at public places.

The contactless systems are being initially installed at eight sites in the National Capital Region, including four in Delhi, two in Gurugram and two in Noida.

“Hindware has remained committed to promote health and hygiene in the society, and the Contactless Handwashing System is reflective of our efforts in this direction.  As the nation transitions through the Unlock phase, there is a need to stay cautious while we get into our routines. Safety is of prime importance; however, it is not always close at hand when we venture out. With our new initiative, we are aiming to not only bring safe hygiene practices to the masses, but also drive a behavior change which is imperative in the new normal,” said Sandip Somany, Chairman and Managing Director, Brilloca Limited.

Crafted after a thorough field study at Hindware Design Studio, the contactless handwashing system come fitted with sensor operated faucet, basin and foot operated soap dispenser with a digital sensor which keeps a count of hand-washes at that particular station.

Sanjay Kalra, Chief Executive Officer, Bath Products & Tiles, Brilloca Limited, said, “These are unprecedented times, and it is imperative that the brands, with their expertise and knowledge, bring solutions that contribute towards the larger priority of the nation. While the focus remains on arresting the spread of Covid19, it is also important to stay vigilant as we step out during the Unlock phase. The contactless handwashing systems are being installed at specific locations where the footfall is expected to be higher. We are starting with the initiative in the National Capital Region and will adopt a phased approach to expand further.”

"Planning and execution was really difficult in this covid situation .However Xperia Group has put in its best to execute the entire campaign. Xperia Group is always ready to execute any such experiential campaign with challenges", said Saibal Gupta, CEO, Xperia Group.