The mobile vans were bunched together and parked on the outskirts of the various towns and at the event venue. 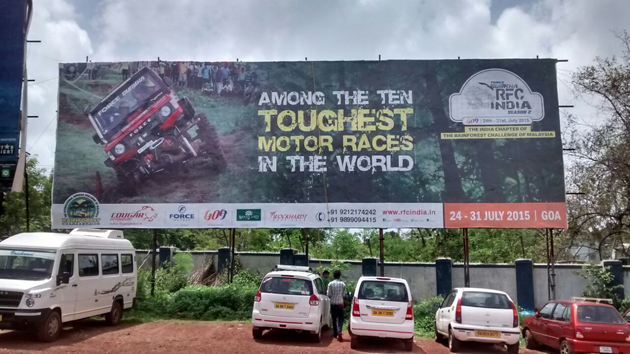 Promoting the Rain Forest Challenge (RFC), India that happened in July, Cougar Motorsport launched an innovative outdoor campaign throughout Goa featuring mobile vans to maximize visibility throughout the beach town. The campaign used a number of billboard-mounted mobile vans moving along national highways and district roads in a combination of a caravan format and single units.

India's only international motorsport event, RFC's second edition was held this year in Goa. Speaking about the outdoor promotion campaign this year, Ashish Gupta, CEO and Founder, Cougar Motorsport said, "RFC is already a big-volume event and talk-of-the-town. Along with 15 chapters worldwide, the Indian chapter is comparatively new as only the second edition has taken place in India this year. Keeping the buzz of the event, which has already been created last year, we were sure that we did not want static billboards but we wanted moving vans to maximize visibility. The travelling vans managed to attract more spectators across the town as these vans travelled throughout the length of the district.â€ Cougar had already initiated a number of digital and social media campaigns in the past but this was the first major outdoor initiative they stepped into. 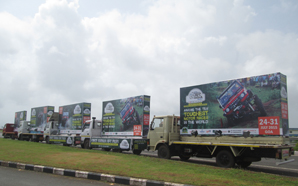 Explaining the exclusivity and message communicated through the campaign, Angelo Nunes of Adcity Advertising, Goa, commented, "This is the first time Cougar launched such a campaign which was used to create buzz and awareness in Goa right before RFC. The event already grabbed eyeballs last year and this year, along with this campaign, it attracted more attention. The mobile vans were bunched together and parked on the outskirts of the various towns and at the event venue. Large hoardings were utilized near the Goa Airport that drew much attention from the air travellers amongst others.â€

Talking on the brief, Angelo added, "Tougher than the toughest was the brief that the whole campaign was worked around.  Hence, we involved vans with tough looks and made them travel all across the town to create the impact right before RFC.â€ RFC was hosted in Goa from 24th to 31st July, 2015.