The campaign was rolled out in Bangalore, Delhi & NCR, Chennai, Hyderabad and Chandigarh

Online fashion portal Myntra launched an OOH campaign to induce young people to look good and get the maximum likes. The campaign named'Live for Likes' showcases stylish avatars with the copy stating'Get the Looks. Get the Likes'. The idea behind the campaign was to drive more audiences to shop on the website. The campaign creative duties were handled by Lowe Lintas and Partners and the OOH duties by Kinetic Worldwide India.

Vikas Ahuja, CMO, Myntra, said, "Selfies are a common trend among youngsters and people try to put their best foot forward to share pictures of themselves - often it is as important, or more important, to look good online as it is in real life! 'Live for Likes' is a well conceptualised campaign where our creative partner Lowe has tapped into this trend and married it with the key role that fashion plays in helping people look good.â€

The campaign was executed in Bangalore, Delhi & NCR, corporate parks in Chennai, Hyderabad and Chandigarh.  Instead of plastering the entire cities, the brand has strategically used locations like large corporate parks, building facades, building wraps and mega hoardings. 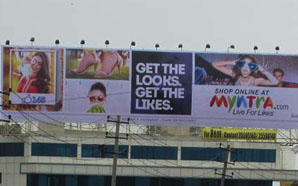 "We've all done some crazy things to get likes. We wanted to bring that alive. It had to be relatable, but at the same time it had to be fashionable. It is a difficult balance. We are really happy with the way Vishwesh from Corcoise managed this. He's new, raw and has a great sense of storytelling and aesthetics,â€ added Rajesh Ramaswamy - Executive Creative Director, Lowe Lintas.

G V Krishnan, Executive Director, Lowe Lintas and Partners - South, said, "While a whole lot of fashion players have built their brand in the offline space, as an online e-commerce player we saw an opportunity to create a brand which could own fashion that makes you look great online. The idea "Live for Likes' allows us to connect with the youth and their fashion sentiment online, which our bold clients endorsed whole-heartedly."
Tags : Myntra Vikas Ahuja Kinetic Worldwide India Lowe Lintas
Advertisement