It's now brisk business for advertising agencies as the major political parties have embarked on publicity campaign in the run-up to the general elections. 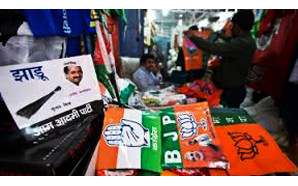 The outdoor hoardings at all vantage points in different urban areas have been taken up by parties like Congress, BJD and BJP, displaying catchy slogans in local language and life-size photographs of their respective leaders, Rahul Gandhi, Naveen Patnaik and Narendra Modi.


According to BJD sources, the party has taken up about 400 outdoor hoardings in twin cities of Cuttack and Bhubaneswar alone for its publicity blitzkrieg. "We had to respond following massive outdoor campaign by our main rivals Congress and BJP," said the party leader. 'Mein Nahi, Hum' (Not I, we), 'Bhange nahi, jode (We don't divide, unite)', 'Sabu hatare Shakti, Sabu hatare unnati' (power and progress in everybody's hand) are some of the ad campaigns featuring Rahul Gandhi launched by Congress to woo the state voters.

"These are wind fall orders which keeps on coming in election time. For an industry which was going through recession because of slowdown in the economy, this is a welcome sign. Outdoor hoardings, many of which were lying vacant, are certainly in demand," pointed out the official of an ad agency.

Another agency official, however, pointed out that the sector is now on a growth track compared to the previous fiscal. But the growth can't be attributed to the ensuing elections alone, he added.

"The campaigns of the political parties is just like adding a new taste to our stapled food though the enthusiasm may last only for 30 days," said Niranjan Dash, Partner, Torrent Advertisers, a leading advertising agency in the state.

"These advertisements are giving a fillip to the sector as many hoardings were lying vacant," he added. The outdoor advertising market was on a slow lane after the cancellation of 122 licences of the erring telecom companies by the Supreme Court after the exposure of the multi-crore 2G spectrum scam. It is followed by the slowdown in the real estate market in wake of economic recession.

Busting of chit fund scam and mining scam have also added to the woes of ad agencies in the state. In the past, shut down of telecom companies like S Tel, a joint venture between Chennai-based Siva Group and Bahrain Telecom (Batelco) and contraction of operation of Uninor in the state had taken a toll on the outdoor advertisers.