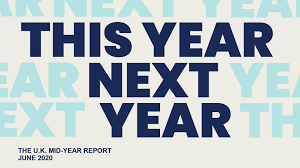 Global agency, GroupM has released its June 2020 U.K. mid-year forecast report titled ‘This Year, Next Year’. The report said that according to consensus data as of the end of May, tracked by Refinitiv, that called for a 7.7% real decline in economic growth for the year 2020, surpassing expectations of a 5% decline as of the end of April. This is because of the global pandemic, which is impacting the U.K.’s society harder. Even the slight growth projections for this year from as recently as early March have completely fallen away. It is now all but certain that the 2020 economy will be weaker than any in the past century.

However, the report said that positive news is also visible on the horizon as the U.K. advertising market is starting to stabilise after an initial freefall that began in late March. Following seven years of mid-to-high single digit growth, as of early June, GroupM estimates that the advertising market will decline by 13% this year, followed by 13% growth next year.

For reference, the 2009 global financial crisis produced a 12% decline. Considering that economic growth will be significantly worse in 2020 relative to what was observed in 2009, the fact that the outcome for advertising in 2020 is only slightly worse is potentially surprising, the report added.

According to the report the Out-of-Home advertising is set to suffer more than most media during 2020, with a 35% decline expected this year and a 23% rate of growth expected for next year. New demand for outdoor advertising essentially stopped during the worst of the pandemic, generally only leaving media owners with the limited revenue that was associated with longer-term budget commitments and long-term advertising placements.

The assumption of consumers that there won’t be a vaccine for the treatment of Covid19 prior to mid-next year means consumers will not resume normal out-of-home behaviours until that time. This will delay a rebound for outdoor advertising until the second half of 2021, with gradual rebound aiding 2022 growth figures as well.

Increasing use of digital inventory and the flexibility that follows from digitization, including programmatic trading tactics, will further help to support favourable ongoing trends.