According to World Federation of Advertisers (WFA)’s latest research, the multinational companies say they are likely to cut ad spending harder than originally planned, and for longer, in response to the COVID-19 pandemic across all media channels.

The WFA’s COVID-19 Response Tracker reveals that 89% of multinationals have put campaigns on ice – up from 81% in March. And 52% of those companies surveyed said they would now hold back on ad spending for six months or longer, which compares with just 19% who said they planned similar medium-term action in March. 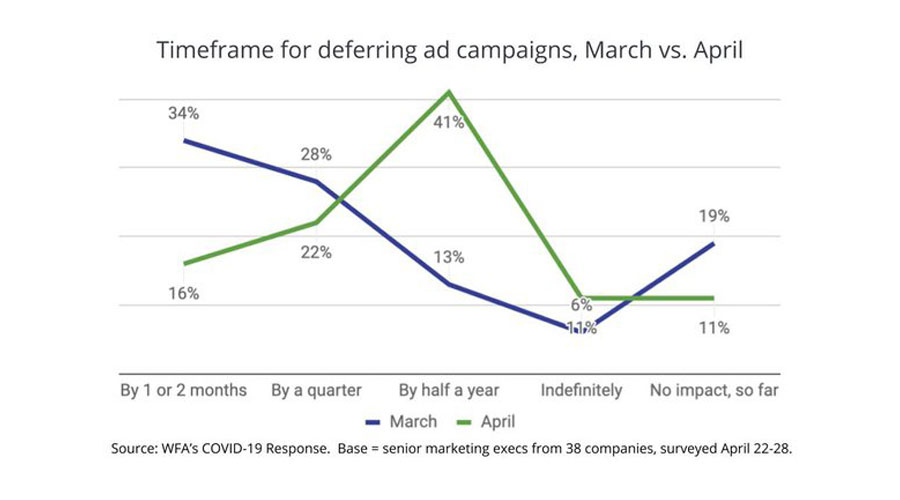 The findings are based on responses from 38 companies in 17 different categories with a total global ad spend of $46 billion.

The number of companies now running some kind of crisis response campaign has more than doubled since March – 32% then compared to 68% now. But, the WFA says, this rising activity will not compensate for the deep cuts to other campaigns.

The WFA forecasts that global ad budgets will be down 36% in the first half of the year, and 31% for the full year.

While 62% of respondents said they believed it was essential for brands to avoid “going dark” during the crisis, they are still making big cuts to overall ad spending. TV is expected to be down globally by 33% over the first half of the year, but print (down 37%), out of home (down 49%), and events (down 56%) are suffering even more dramatically.

Spending falls on digital are far less dramatic, with online video down just 7% and online display down 14%. Radio (down 25%), Point of Sale (-23%) and Influencer (-22%) are expected to see deep cuts over the year.

92 per cent of respondents said the crisis will have a long-term impact on the way they operate, and 84% agreed it was an opportunity to “rethink everything in terms of our marketing organization”; the same percentage said the crisis has already accelerated digital transformation.

Almost two-thirds (63%) said they were now concentrating on strategies for the immediate post-crisis period, and for the longer term; but in the meantime, 73% agree they will have to find ways to support agencies during the crisis.