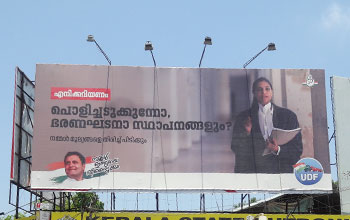 Even as Prime Minister Narendra Modi has called for a ban on single-use plastics from October 2, the Kerala state government has imposed a ban on the use of flex boards with effect from August 29. While the call for the ban on single-use plastics does not include flex PVC, the Kerala state government has taken the step as an outcome of a series of citizen actions that called for removal of unauthorised outdoor media. According to the order issued by the state government, printing and use of PVC flex boards has been banned, and in its place only banners and publicity material made of recyclable materials like paper, PE, and cloth would be permitted.

Further, every such display would need to feature the message that it is ‘recyclable, PVC free’, apart from details like the expiry date of the material, place of printing, and printing number. The contact number of customers also needs to be recorded by the printer.

The order has disallowed use of plastic coated cloth for advertising and publicity display.

The government has provided for heft fines to be imposed on anyone contravening this order. Earlier this year, the High Court had banned the use of PVC flex boards for the Lok Sabha election campaign.

A few media owners operating in Kerala when contacted for their comment on this development refrained from sharing their viewpoint, citing that they were busy with the preparations for the Onam festival.

Nonetheless, Raju Menon, State General Secretary of Kerala Advertising Association who also run Maitri Advertising Works, welcomed the state government’s move, citing that such steps are necessary. There has to be a reduction in the usage of plastics in order to build a healthy environment. This will spur the transformation of OOH business, maybe with the ushering in of more DOOH.”

He also stated that this step was an outcome of various measures taken by the government in the past. He added that ‘there are indeed some responsible outdoor companies that are switching to the use of green material”. Moreover, he mentioned that a major media brand in Kerala has been using green fabric for their OOH advertising in the state for the past two years.

While a PVC flex display will look glossier compared to a fabric display, that will cease to be an issue when every media operator follows a single display standard. As regards the higher cost of green media, as the demand for those options increase, the unit cost is sure to come down.

In the midst of this development, it is also imperative to build the awareness among the media operators on the use of green materials. On this, Manish Taneja, Director of Delhi-based Taneja Technicom that has introduced the bio-degradable banner fabric WYTE BioCarelit 200, stated, “There is utmost need for educating the different government bodies about the media materials available in the market. Merely imposing a ban on PVC won’t give a complete solution because there are other materials in the market such as PE that contain diluted form of plastic which are equally harmful to nature.”