A panel discussion at East Talks OOH conference held in in Kolkata recently discussed'What will be the key to increase brand spends in eastern market\'. 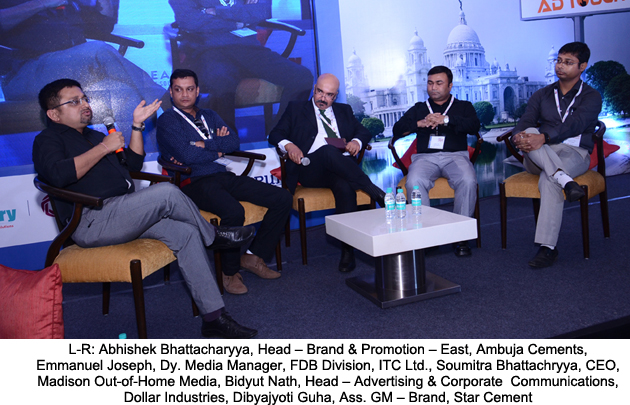 The panel discussed the basic needs for the outdoor market which are necessary for the industry to understand. They unanimously expressed that there is a thrust in consumerism and thus the overall media pie for OOH will increase in the region.

Emmanuel shares that nationally two perceptions are to be tackled for this, because a common discussion in any brand team is the budget utilised either in ATL or BTL and the other is understanding the perception of east market. "The current market figures are quite positive which shows that the rate of growth related to different consumption patterns are growing with the base market having a huge potential."

The panel pointed out that the OOH media should not be only restricted to traditional formats.

Abhishek shared that for a category like cement, it is not recall driven but acts as a supporting media where other media formats are not available.

Dibyajyoti expressed that 30% of their advertising budget goes to OOH, though mostly this media is not considered to be a primary format but acts as a reminder and multiplier.

The panel unanimously agreed that SOP has to be in place and the quality of plan and delivery is primary for any brand and financial are secondary, if the former is in place.

Bidyut said that right perception of the region has to build up in front of national players and mutual benefits are to be discussed upon.

While summing up the session, the panellists agreed that a reference point has to be created by the OOH industry which will justify the spends of the brands and take the vertical to the next level.